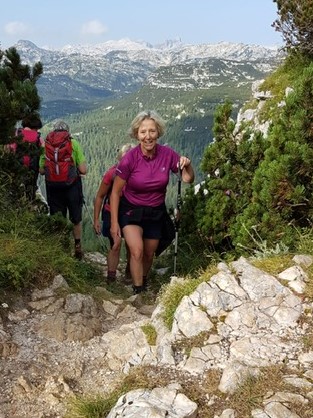 I qualified as a physiotherapist from St Thomas Hospital too long ago to mention. I worked as a junior at Kings College, London before travelling and working, sometimes as a physio, in Australia.

I did locum work in the community and some private practices in London, Stratford and Leamington on my return. I worked in Coventry, mostly at Cov and Warwick, covering a variety of musculoskeletal roles. I undertook a BSc whilst working full time which led into management at Walsgrave Hospital, followed by a research role at Warwick. Training in Pilates rounded off a rather eclectic career.

I have always enjoyed sport and exercise. I strongly believe that 'movement' in many forms helps to resolve many problems both physical and mental. Combining Pilates with physiotherapy appealed as it is a form of exercise that can be adapted to suit almost anyone.

I plan my classes to provide an all over workout, with progression as the weeks go by. I often use equipment both to add variety and fun. My classes can be quite fast paced, particularly for more advanced groups. I often use lower level exercises as a prelude to something harder which allows you to work at a level that suits you that day.

I love running and have done five half marathons. I also walk with friends and regularly plan long distance treks: Albania next, and skiing whenever I can!

My daughter is a midwife in Bournemouth, older son is film making in Barcelona and the younger son, depending on the time of year, might be doing a ski season or helping at kids camp in the States.